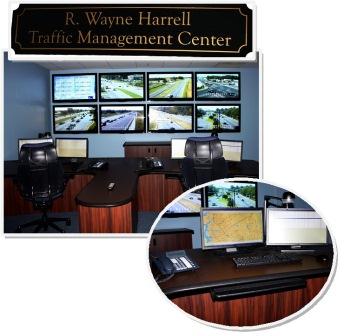 The traffic signal system is managed from a computer network platform known as the Management Information System for Transportation® or MIST®. All of the City's 170-plus traffic signals are now operated and managed through MIST. Most traffic signals within the signal system operate using fixed timing plans that are based on historical traffic data. Typically, specific timing plans are developed for the morning, mid-day, and evening peak traffic periods.

In order to help improve operational efficiency, the City operates a number of key corridors that experience consistent traffic demand in Time Based Coordination (TBC). In TBC, a series of traffic signals are linked together via wireless communications and each signal within that particular corridor operates using the same cycle length. The purpose of using the same cycle length is to allow platoons of vehicles to travel through the corridor with a minimum of stops at traffic signals. TBC is a very complex signal timing scheme that relies heavily on consistent mainline and side-street traffic demand to operate at the highest efficiency. TBC is currently operating in the following corridors:

Chesapeake is also one of the few cities in the country to implement Traffic Adaptive Control technology, which is now operating in the following corridors that experience highly variable traffic demand:

Instead of using timing plans developed from historical data, these corridors use multiple sensors in the roadway to deliver real-time traffic flow through the corridor. The primary advantage to Traffic Adaptive Control is that it allows the traffic signal system to make real-time signal timing adjustments based on existing traffic demand conditions. This system will not compensate for those times when there is simply more traffic attempting to pass through a corridor than the corridor can physically accommodate, i.e. demand exceeds capacity. However, it will process the traffic as efficiently as possible. In addition, Traffic Adaptive Control has proven to be the best signal control technology to adjust corridor signal timings for unplanned events, such as when an accident on the interstate system causes an unexpected increase in traffic above normal conditions on parallel routes, such as Military Highway.

The CCTV system now contains twenty-three CCTV cameras located at key intersections and along highly traveled corridors throughout the City, including the Chesapeake Expressway. In the near future, these CCTV images will be made available online. At the present time, traffic engineers use the CCTV system to monitor traffic conditions and check traffic signal operations.

The Traffic Management system also contains seven Variable Message Signs at strategic locations to advise motorists of traffic conditions such as bridge openings or may be used for Emergency Operations such as hurricane evacuation or emergency shelter information. In addition, the TMS contains approximately 35 permanent count stations located throughout the City to continually collect traffic data. This data may be used to adjust traffic signal timings or to measure increasing traffic demand that can be used to plan future road projects.

What is the purpose of the cameras and the reason for posting them on the City website?

The Closed-Circuit Television Cameras (CCTV) are used to monitor traffic conditions at key locations in the City. By posting the CCTV images on the City's website, citizens have the opportunity to check the existing traffic conditions in real-time from their computer at work or at home.

This information may prove valuable to citizens planning a trip to one of the locations where CCTV cameras are installed by allowing the citizens to check traffic conditions prior to traveling to or through one of those locations.

How are the camera locations chosen?

The CCTV cameras are deployed at critical locations where high traffic demand occurs.  At this time, four cameras have been installed in the Greenbrier area.

Who funds this project?

The CCTV cameras and the communication infrastructure required to transmit the video images are funded through the federal Congestion, Mitigation, and Air Quality (CMAQ) program.  No City match is required.